It seems a strange time to aver with confidence the survival, even fecundity, of the human race. We seem at this juncture to be struggling with one another and with nature itself; we are exhausting our resources and ourselves. But Alexandra Nechita has always believed in the strength and the good intentions of her species, and no matter what the news or prognosis is today or tomorrow, her art takes a longer view. It celebrates who we are, what we can be, and how our salvation is part of our vision – and vice versa.

Love Anatomy is a splendid example of Nechita’s human optimism. One of five monumental figure sculptures produced by Nechita, Love Anatomy depicts a female figure, one highly stylized in Nechita’s neo-modernist manner so that its references are readily apparent. Whether or not the figure is pregnant – and the ambiguity is crucial, both to its meaning and its modernism – she reads as a representation of life’s inextinguishable persistence. Her exaggerated roundness, set off by the balancing lines of her limbs, inheres at once the power of the feminine, the universality of procreative energy, and, as stated, the grandeur of the human race. Love Anatomy is certainly a feminist statement, properly arrogating the survival of the species to its child-bearing gender; but it also acknowledges the drive to propagate as the pilot light of human endurance. The male presence is implied while the female presence is front and center, the literal, figurative, and ideological subject of the sculpture.

In a way, Nechita has here appropriated and reconfigured modernist tropes on the female form – almost all realized by male artists – to move the subject out of the exclusively male gaze and into an equitable context, that is, a context in which the female form claims its own vitality. The artist follows this force rather than commands it, shaping it to its demands and inferences more than to her own. In effect, Nechita has moved beyond the yang of history (and art history) to collaborate with the yin – while maintaining, or at least acknowledging, the male energy of her 20th-century predecessors. The work of Pablo Picasso, Nechita’s avowed principle influence, certainly reflects in Love Anatomy, if rather more distantly than in her earlier artwork. In particular, the mostly female figures of his Surrealist period recrudesce in Love Anatomy. In his paintings from the 1930s Picasso renders the women at once as active, living beings, passing through and occupying space with often vigorous activity, and as blocky objects, seemingly molded from some sort of weighty grayish matter (clay? lead?) frozen in an ambiguous space. These presences are thus themselves ambiguous, caught between motion and stillness, vitality and immobility. Nechita’s sculpture stresses the figure’s almost-classic monumentality, but various factors – the stylized hands, for instance, almost like birds’ wings – endow it with a subtle but persistent dynamism.

Other 20th century artists speak through Love Anatomy: Fernand Léger, for instance, who fashioned his figures into living machines, or Edmund Jeanneret, the architect-artist better known as Le Corbusier, who proposed the human form as a unit of measurement in space (in such work as his visual-verbal treatise Modulor). Even the sculpture of Joan Mirò anticipates Nechita’s with its fanciful arrangements of eccentric shapes implying body parts. There is decidedly something classic in the neo-modernism of Love Anatomy, something that roots itself in the formal order propounded by cubism – but, as these comparisons indicate, the earlier artists’ classicism was hardly pure, and neither is Nechita’s.

Nechita is closer, in spirit as well as generation, to surrealism than she is to the elegant rigidities of cubism. If she reorders the female form, she does it as hallucination as much as architecture. Indeed, in Love Anatomy she employs the compositional logic of cubism to stabilize the chaotic reverie of surrealism, much as did Alberto Giacometti or Alexander Calder – or Louise Bourgeois. Bourgeois’ work in two and three dimensions, spanning nearly eight decades, was nothing if not surrealist in its images and impulses. But she limned those images and exercised those impulses with pictorial rationalism that indulged her own hand only as much as it indulged the viewer’s eye. Pattern, spatial balance, and a sense of elemental force characterize Bourgeois’ oeuvre – and in works, like Love Anatomy, such stylistic synthesis recurs in Nechita’s art.

Louise Bourgeois would recognize this synthesis in Love Anatomy and recognize Nechita as a granddaughter of cubism but a daughter of surrealism. And we recognize Love Anatomy itself as a direct descendant of the Venus of Willendorf, Winged Victory of Samothrace, and other religious (or at least spiritually invested) votive objects meant to capture an idea of the ultimate or transcendent female. Beauty is only one of the myriad factors that animate and reflect in these ancient sculptures and in this contemporary descendant of theirs. Fertility, renewal, desire, nurture, and so many more forces vitalize Love Anatomy as they do its matriarchal line.

Even so, Nechita has made sure to invest in the stylizations of her sculpture with the possibility of individual (and not necessarily precise) identity. The sculpture inheres not only the realm of womanhood but the distinction of anyone self-recognized woman — not only female presence and potential but for any given woman’s presence and potential. Love Anatomy is a cipher for an entire gender – a fluid gender, as the anatomical displacements attest, but a coherent one, as the classic order of those displacements makes equally clear. Alexandra Nechita has given form not just to anatomy, nor just to the sensation of love; she has realized a monument to the uniqueness of every woman and the power of womanhood. In such power resides the biological maintenance of the species, its social stability, and its flexible response to stress. Love Anatomy is a healing totem, a composite form whose poised voluptuousness evokes the human life force as much through its resemblance to a tree as to a woman – that is, in no small part, its physical substance as much as its visual presence. Love Anatomy contains its own ritual. 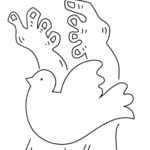